What are vocal cord nodules?

Vocal cord nodules are benign calluses (scar) that form along the mid-portions of the vocal cord edges, where the vocal cords collide into one another during speaking or singing. They are sometimes referred to as “singer’s nodes” or “vocal nodes” in common usage. The technical term are fibrovascular lesions, since some nodules are comprised of both scar (“fibro”) and abnormal blood vessels (“vascular”)

Depending on their size, vocal cord nodules can cause a raspy or breathy speaking voice. By impairing how the vocal cords close and / or vibrate during voice production, vocal cord nodules reduce vocal efficiency. As a result, if large, they can sometimes be associated with compensatory vocal fatigue or pain with speaking or singing.

Smaller vocal cord nodules may only intermittently impair the speaking voice, or sometimes only problems during singing (and not speaking) will occur. Typically, singers with vocal cord nodules will have difficulty reaching the upper part of their vocal range, particularly when singing lightly.

Vocal cord nodules typically occur in pairs (one on each vocal cord), although they can be asymmetric in size and can also occur only on one vocal cord as a reaction to another type of lesion (eg vocal cord polyp or vocal cord cyst) on the other vocal cord).

Who gets vocal cord nodules?

They typically occur in patients who are very talkative or have an occupation or hobby which requires them to vocalize significantly. Vocal cord nodules are believed to be a chronic disease that develops over months or years as opposed to an acute response to a short period of vocal overuse, although they may become exacerbated acutely and therefore become noticeable to patients in a seemingly shorter period of time.

Vocal cord nodules are much more common in women than men. The reasons for this are not entirely known. One theory is that there are gender-based anatomic and functional differences in their vocal cords and larynges (voice boxes). For instance, because they are anatomically shorter, the vocal cords typically vibrate (collide into one another) approximately 60% faster in women than men, accounting for the higher average speaking pitch of female versus males. As a result, one study of male and female K - 12 teachers found that this amounted to 1.2 million vocal cord collisions in men but 2 million vocal cord collisions in the same group of women teachers during a single 8 hour day of teaching.1 Very few parts of the human body are subject this this much mechanical trauma!

The short answer to this question is no. Classical vocal cord nodules are areas of scar (fibrovascular lesions to be exact) that have absolutely no potential to turn into cancer. On occasion, the term “nodule” will (unfortunately) be used to non-specifically describe a lesion on one or both vocal cords, but it does not actually represent what the lesion is ultimately diagnosed as. To the trained eye and in the proper clinical setting, the diagnosis of true vocal cord nodules is usually quite apparent after an office-based examination of the larynx.

Are vocal cord nodules the result of poor or improper singing technique?

This is a complex question. In some cases, the answer may be yes. A well-trained voice therapist can assess that.

However, for vocalists with proper training, the answer may be, not necessarily. Vocal cord nodule genesis be more dependent on the amount and type of speaking voice use when an individual is not singing. Irrespective of the amount of singing done, the vocal cords generally see more cumulative trauma outside of vocal performances and/or rehearsals. That is why many successful professional vocalists on an 8 show per week schedule will refrain from excessive voice use between performances. As vocal athletes, they need to rest their instrument, just as you would expect a running back not to run a marathon after a football game.

Nodules classically occur at the interface between the surface lining of the vocal cords and the deeper vibratory layer.   The goal of surgery is to precisely remove the nodules while maximally preserving this underlying vibratory layer (superficial lamina propria (SLP)).  Failure to do so can unfortunately cause permanent vocal damage. 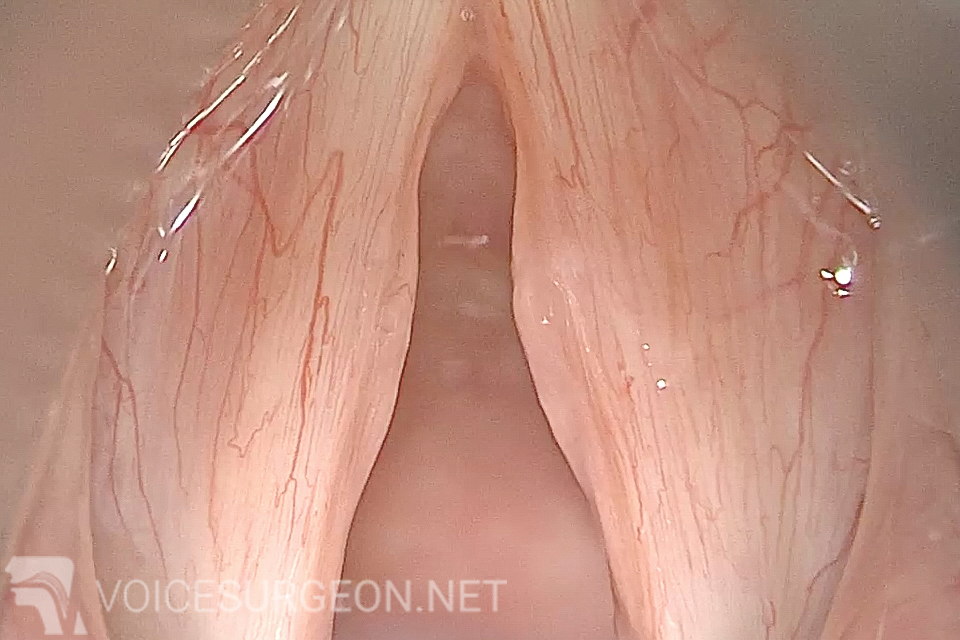 Vocal cord nodules as seen in the operating room during microlaryngoscopy

Same vocal cord nodules at higher magnification. A probe that is 4 millimeters in size is next to them, for scale; this is smaller than Lincoln’s head on a penny 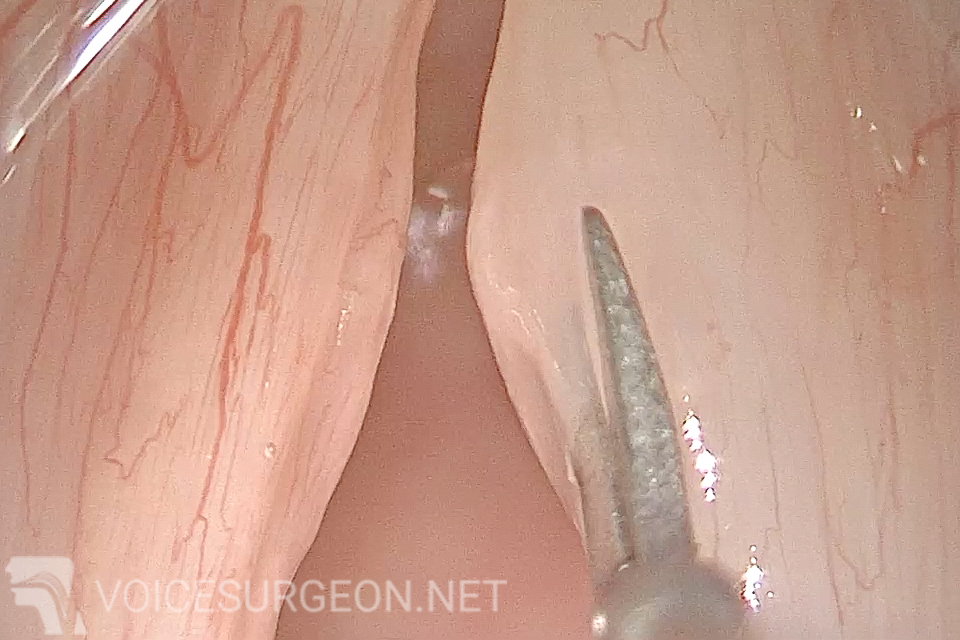 A microflap containing the scar of the nodule is gently retracted. It is of utmost importance for the surgeon to define the interface between scar and normal vibratory tissue (superficial lamina propria) and to maximally preserve the later.

The microflap is meticulously thinned of the scar using small forceps and scissors. If possible, the overlying healthy surface membrane should be preserved, to optimize healing.

The end result in the operating room, after phonomicrosurgical resection of both vocal cord nodules.

Examples of Vocal Cord Nodules - Before and After Surgery

Large vocal cord nodules in a patient with significant occupational voice use (saleswoman) as well as a pattern of voice abuse.

Smaller vocal cord nodules in a waitress and part-time professional blues singer (mezzo-soprano) who was an undergraduate vocal performance major.

Post-operative result after vocal cord nodule surgery. In addition to improvements in her speaking voice, the top of her vocal range increased by 3 halftones as measured in her voice analysis at 2 months after surgery.